You are here: Home » Articles » Miscellaneous Articles » Overview of Jewish Writings and Commentaries 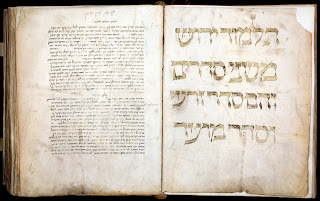 This article is also available in PDF format: Overview of Jewish Writings and Commentaries

The word “Talmud” is a Hebrew word meaning “learning, instruction.” The Talmud is a central text of mainstream Judaism and consists primarily of discussions and commentary on Jewish history, law (especially its practical application to life), customs and culture. The Talmud consists of what are known as the Gemara and the Mishnah.

This tradition was maintained only in oral form until about the 2nd century A.D., when the oral law was compiled and written down in a document called the Mishnah. Over the next few centuries, additional commentaries elaborating on the Mishnah were written down in Jerusalem and Babylon. These additional commentaries are known as the Gemara. The Gemara and the Mishnah together are known as the Talmud. This was completed in the 5th century A.D.

The Tanakh is the appropriate term to use for the Hebrew Scriptures, “Scripture” being a synonym used by both Jews and non-Jews. This word is derived from the Hebrew letters of its three components.

Ketuvim (Writings): The Books of Psalms, Proverbs, Job, Song of Songs, Ruth, Lamentations, Ecclesiastes, Esther, Daniel (although not all that is included in the Christian Canon), Ezra and Nehemiah, I Chronicles, and II Chronicles.

The Targums are interpretive renderings of the books of the Hebrew Scriptures (with the exception of Ezra, Nehemiah, and Daniel) into Aramaic. Such versions were needed when Hebrew ceased to be the normal medium of communication among the Jews.

Midrash is a form of rabbinic literature. There are two types of Midrash: Midrash Aggada and Midrash Halakha.

Midrash Aggada can best be described as a form of storytelling that explores ethics and values in biblical texts. (“Aggada” literally means “story” or “telling” in Hebrew.) It can take any biblical word or verse and interpret it to answer a question or explain something in the text. Whereas Midrash Aggada focuses on Biblical characters as they pertain to values and ideas, Midrash Halakha focuses on Jewish law and practice. Midrash Halakha attempts to take biblical texts that are either general or unclear and to clarify what they mean.

The Soncino Books of the Bible is a set of Hebrew Bible commentaries, covering the whole Tanakh (Old Testament) in fourteen volumes, published by the Soncino Press. The first volume to appear was Psalms in 1945, and the last was Chronicles in 1952. The series was edited by Rev. Dr. Abraham Cohen.

The Jewish Publication Society of America Version (JPS) of the Tanakh (the Hebrew Bible) was the first Bible translation published by the Jewish Publication Society of America and the first translation of the Tanakh into English by a committee of Jews. The translation, which appeared in 1917, is heavily indebted to the Revised Version and American Standard Version. It differs from them in many passages where Jewish and Christian interpretations differ, notably in Isaiah 7:14, where it has “young woman” as opposed to the word “virgin” which is used in most Christian Bibles.

The Septuagint (LXX): The Greek translation of the Hebrew Old Testament. The name is derived from the 72 Jewish scholars that completed the translation at Alexandria, Egypt between 285-274 BC.

The Vulgate: A Latin translation from the Hebrew, Greek and Aramaic Scriptures by Jerome between 382 and 405 AD.

2 Responses to “Overview of Jewish Writings and Commentaries”